See You in December! 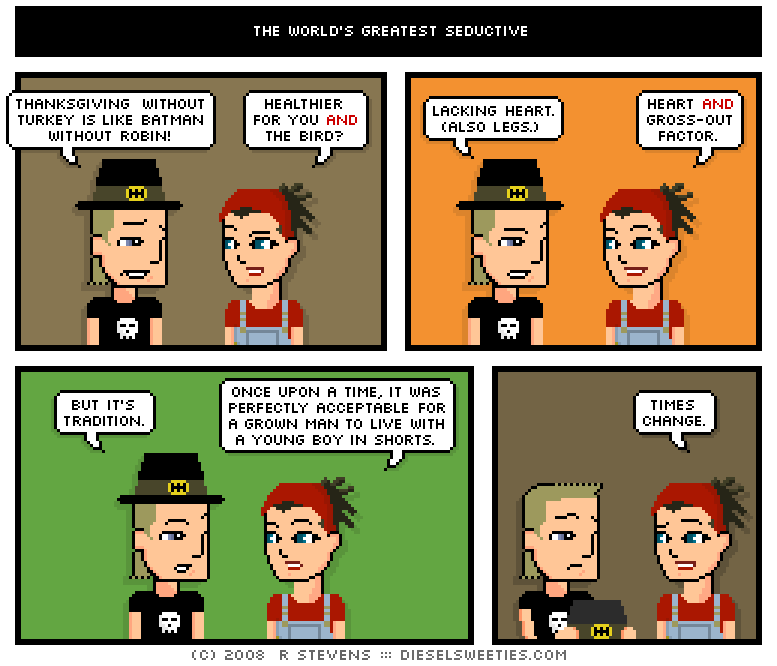 The annual culling of turkeys is upon us. To celebrate, the lady and I are headed out west to meet up with my folks, my brother, his wife and son (so cyooot!), and various sets of grandparents, uncles, aunts, and cousins. We’re leaving early tomorrow so I’ll be away from a machine until Monday. Sorry to all my non U.S. readers, but thems the breaks. But don’t worry, we’ll get to the whole Batman thing when I get back. Also, I want to do a proper review of Chocolate. I’ve been meaning to for a while and few people have been asking about it so I want to give the movie its due. In short, I highly recommend it. But more when I get back.

So keep those emails rolling. I read every single one even if I don’t always respond. You guys make blogging a real joy. I’m thankful for all of my readers! So with that bit of cheesy sappiness, I’ll see you all next week. Have a great vacation if you’re in the U.S. and if you’re elsewhere, have a great weekend as well!

Well, lets face it, we’re only half interested in the music. I’m actually not expecting to fall in love with every song. There are some musicals that I really like that feature a song or two that I just can’t stand. I think the concept of Repo in and of itself is enough to get me into the theater.

Anyway, here’s another song from the flick, “Zydrate Anatomy.” We get to see Ms. Hilton as Amber Sweet and she’s honestly not horrible.

I love you, America. I want to give you a big sexy hug.

I was speechless when MSNBC declared Obama the winner last night at 11pm. I held my breath. I wouldn’t believe it until McCain gave his concession speech. Sure enough, there was old man McCain up on stage conceding the election. It was all so very true. I teared up.

Truly, this is a time of celebration. Yes, these next four years are going to suck hard. We’ve got this horrible financial crisis on our backs, two very ugly wars to fight, a country horribly divided against itself (“uniter” my yellow ass), strained international relations, Prop 8 passed (idiots!) and that’s just the highlights. But for now, I choose to bask in the glory of this moment. Truly, anything is possible in this insanely crazy country of ours. Anything.

God, I’m still shaking I’m so excited. You have a Giddy Zen Master for today folks.

So, in the words of one George Clinton, “God bless chocolate city and its vanilla suburbs.”

Star Trek is on life support. Nemesis nearly ended the movie franchise. Enterprise sucked the life out of any enthusiasm for another television series. Sure, there’s some buzz surrounding the JJ Abrams reboot movie, but that’s generally coming from JJ Abrams fans. Star Trek needs a kick in the balls. And according to this article sent over by AZM Ally Kensei Dave, Pushing Daisies creator Bryan Fuller agrees.

I would love to do another ‘Star Trek’ series. One where you could go back to the spirit and color of the original ‘Star Trek,’ because somehow, it got cold over the years. I love ‘Next Generation,’ but it’s a little cooler and calmer than the ones from the ‘60s, which were so dynamic and passionate. ’Deep Space Nine’ was the best of the modern ones because it was so emotionally complicated. ‘Enterprise’ was the most sterile of all of them, when it should have been the most fun. ’Star Trek’ has to recreate itself. Otherwise, all the characters start to feel the same. You always have a captain, a doctor, a security officer, and you have the same arguments based on those perspectives. It starts to feel too familiar. So all those paradigms where it takes place on a starship have to be shaken up.

I definitely agree. DS9 took a while to warm up, but I think by the time the last season came around, I was completely hooked. Voyager annoyed the shit out of me, even with the later addition of Thirty Six of D (Happy Borg Fun Bags!).

To be honest, I’m almost burned out on Trek. I still enjoy TOS, TNG, and DS9 and I’ll pop in one of the movies every now and then. But the Trek offerings in the last few years have just failed to reignite my passion for the series. Kind of a shame. I remember TNG night was a big night for our family. We’d take our dinners downstairs to sit in front of the tube and watch as Piccard and his sexy bald head took on Q, Klingons, and the Borg.

You know, I’d be okay if there was no more Trek after the Abrams movie. Time to just leave it alone for a few years.

And you should voté, too!

There was a time in this country when neither my wife nor I would have been allowed to vote so waiting in a line is hardly a big deal. There was also a time in this country when neither Barak Obama or Sarah Palin would have been on the ballot. There are aspects of this 2008 campaign that have sickened me, that have made me fear that we’ve slipped farther backwards. That idiot woman who carved a “B” into her cheek. The religious persecution against Muslims. The fear and hate mongering. Endless attack ads. But today, when I walked into the booth and saw Obama’s and Palin’s names staring back at me, I couldn’t help but smile. Sure, I think she’s fucking insane. But that doesn’t take away from the fact that she’s there.

Stand in line. Bring an umbrella and a comic or two. Vote. Get the fuck out there and vote you glorious, sexy country, you!

Wow. If Gundam Musou 2 wasn’t coming soon, I would totally buy a PSP just for this game. You heard me! Crazy things happen on Gundam Wednesday! As it is, I might just have to “borrow” my brother’s next time I visit him. I believe Gundam vs. Gundam was an arcade game before they brought it to PSP which just proves that Japan wins because one, they still have arcades; and two, those arcades are filled with GUNDAM!

[Via Gundam vs. Gundam]

For the next few months, I’m going to be drawing comics for work. We’re doing a big multimedia feature celebrating the 40th anniversary of the manned Apollo missions that eventually landed us on the moon. I was fortunate enough to convince my bosses to let me do a sort of animated comic treatment and this is the result! I used some classic Apollo photos for reference. All the illustrations were done in Photoshop and Illustrator, animated in After Effects. I also coded up the site. The Apollo 7 is the first animated comic.

Not every day you get to draw comics for a government agency! WHOOHOO!!